Getting Started with TriCaster® TC1 Chapter 11: Output, Recording and Publishing

The previous installments in this series have provided most of the basics that would allow you to undertake a live production with TriCaster® TC1. The final ingredient you need is how to reach the audience with your content. This tutorial explains several different ways to do this.

The traditional live production system sends the final mix to a physical ‘program output’ and the TC1 offers this as well, via SDI. Actually, TC1 offers four physical outputs. As you can see in the tutorial these can be different from one another, allowing the user to send one output at 4K for broadcast over cable or the air, one at 1080p for IMAG, and so on. The setup options for these outputs can be the Program mix just as seen on the Program monitor in the multiviewer, Program (Clean) without graphics and keys, Preview, or any of the other inputs or internal sources, each with your choice of the Master or one of the three Aux audio mixes. In addition, these same output mixes are made available as NewTek NDI® streams on the network. 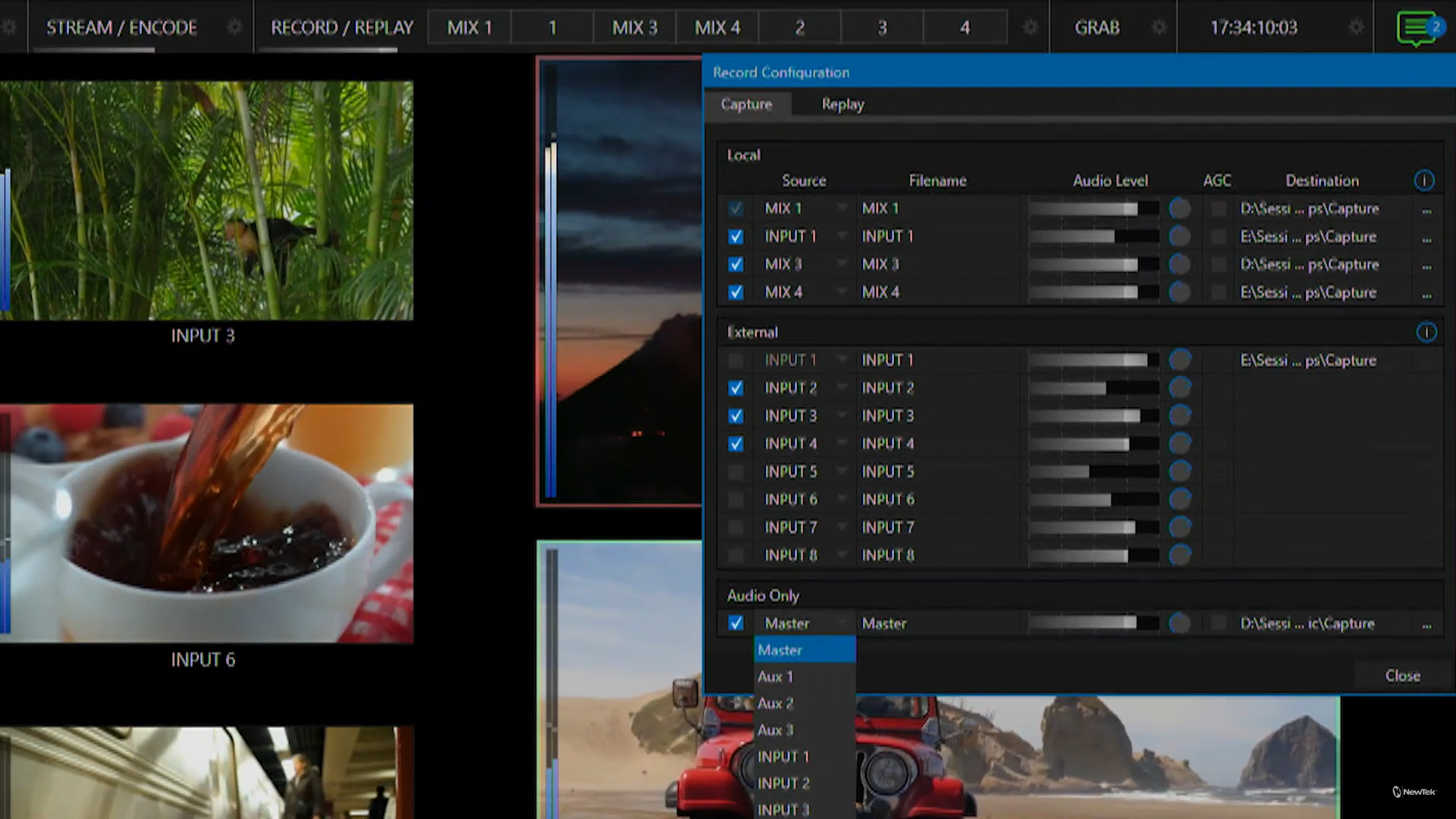 Besides outputting your program, you may also want to record it, and perhaps even to record certain inputs to archive for later use. TC1 can record up to four channels. Each can be independently configured to record either one of the four mixes, or one of the four 3G-SDI hardware inputs. In the tutorial, you can see that the Record panel lists four channels under the Internal heading and eight channels under External. A NewTek Connect Studio NC1 I/O is attached to the TC1, so the user is offered controls to the device’s internal recording options. When you turn any of those on, the NC1 will record those channels to its internal drive.

There are also two streaming encoders in TC1. Like the outputs, those can also be configured independently, so they do not need to both be the same video/audio mix, encoding, resolution and bitrate. Each encoder can also be directed to multiple sources. Presets are available for a number of popular social networks and media platforms, ready to go with just the input of your account information. With the “Custom” option you can also set up connections to other social networks and media platforms. 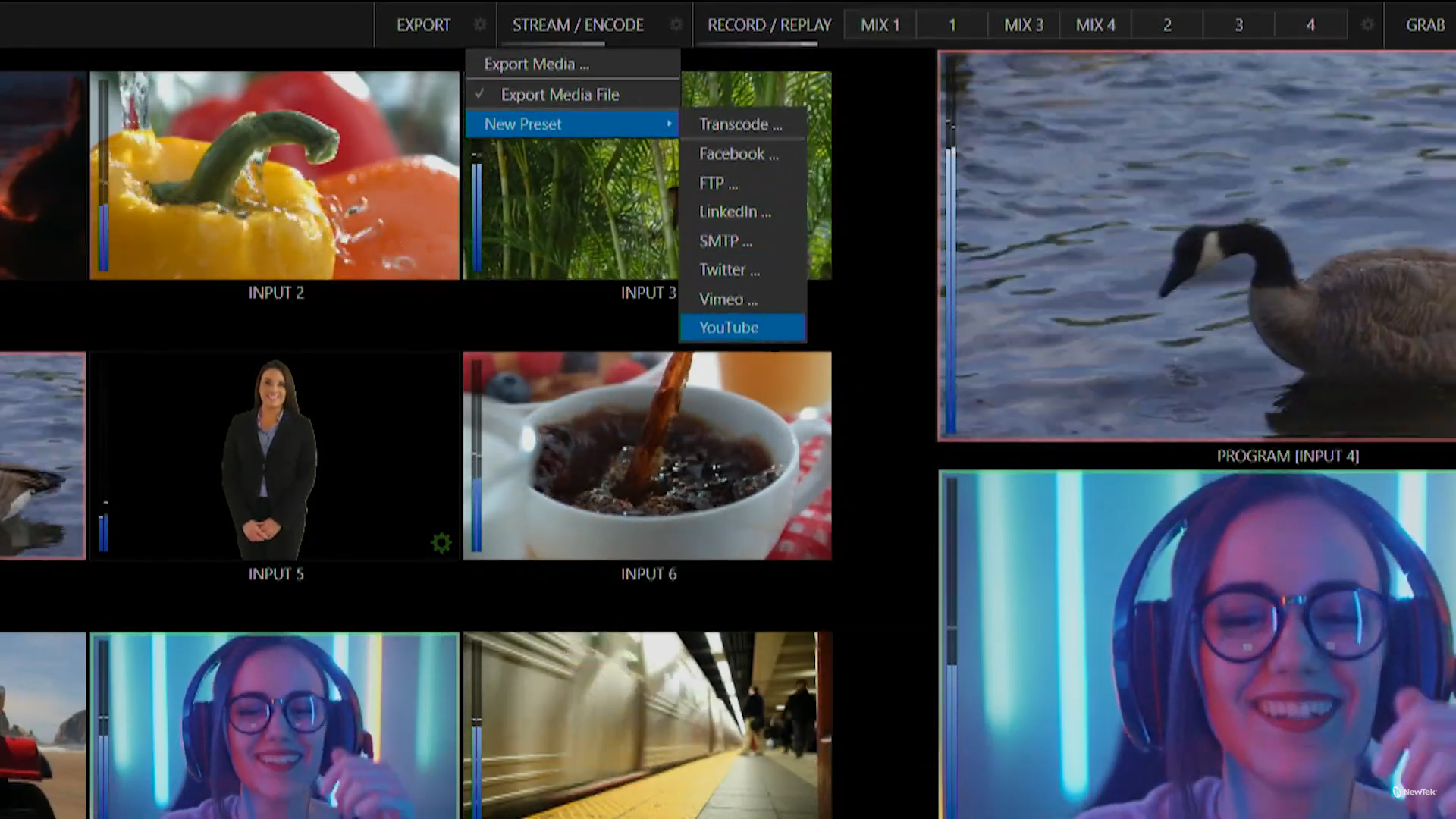 The above show the versatility that originally led to the name “TriCaster,” the ability to simultaneously output content for broadcast, projection and streaming. The TriCaster also includes the ability to publish content to social media on the fly during production. Using the Export menu options on the top menu bar, the operator can pull stills or video clips and add messages, then from the Export Media panel post directly to Facebook, Twitter and others.

Tip 1: You might wish to record all four mixes and all four SDI inputs of the TC1 for full archiving, so that you can use any of the finished or raw video for future production opportunities. You can do so with the optional NewTek Connect Pro software installed on a computer on the same network as the TC1. The TC1 can provide all the mixes and the inputs simultaneously to the network as NDI streams. NewTek Connect Pro can record all of them, or any that are not being recorded by the TC1 itself.

Tip 2: In the recording options discussion above we noted that because an NC1 module was attached, the Record Panel showed controls for the NC1 internal recording options. This form would follow with other NewTek NDI equipment that is on the network. NewTek NDI systems and applications are aware of each other via NDI autodiscovery, and controls for those systems and applications will appear in appropriate locations in the TC1 interface.

Game Streaming with NDI® in OBS and TriCaster

How to Restore Your TriCaster®